A look into Obama, Trump and Biden policies exposes some differential leadership outlined, each has its positive and negative vibes in there system of governance. This is what we look into in this write up. 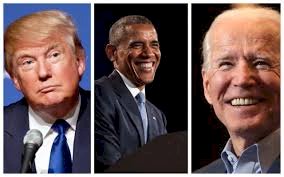 A look into Obama, Trump and Biden policies exposes some differential leadership outlined, each has its positive and negative vibes in there system of governance. This is what we look into in this write up.

Nigerians were banned from seeking immigration visas to the US under Trump. So if you got married to an American for instance, you couldn’t get a Green Card. Also, your employer couldn’t file for you, but Biden might remove it. Although if Biden should implement a "Free for All" visa policy. It doesn't make him a better president than Trump because his policies on economy, security, trade, social welfare and so on might not be as sound as Trumps'.

For example, Obama became president at the height of America's worst depression in about a century and he took unemployment from over 10% to 4.7%. Trump moved it from there to 3.5%. Now that Biden has won, it will be interesting to see what his input on the economy will look like. Also,Consumer and business confidence also jumped after Trump’s election and remained high after the GOP tax cuts took effect in 2018. As recently as February, many Americans rated this as the best economy since the late 1990s. Now those gains might be wiped out..

Some argue that most people don't know anything about Joe Biden and his policies, but have allow the hatred for Trump to becloud their judgement and sense of reasoning. But in reality, decency is really important in everything we do and I think this is what Trump lack. As a leader of a country like the United States, decency is a major attribute to have and potray on a regular basis. As if any of it is without reason. They all have their faults but acting as if Trump is faultless is just as bad as seeing Biden’s but not his faults as well.

Another of Trump indecency is calling African countries shithole, Most people will admit he said the truth about African countries been shitholes, although he shouldn't have used that word. I don't want to castigate my country here you will a lot of information on google and then compare with what you've got in America and you will be disgusted. But no matter how poor a country is NO ONE outside of those directly affected should be given a pass to call it down using such a word. Unless they are doing something directly to affect that situation..

WHY GREECE AND ENGLAND EMBRACE A MONTH OF COVID-19 LOCKDOWN