A LOOK INTO ONDO FORTH COMING GUBERNATORIAL RACE

The Ondo state gubernatorial election is vast around the corner, let’s take a look into it. 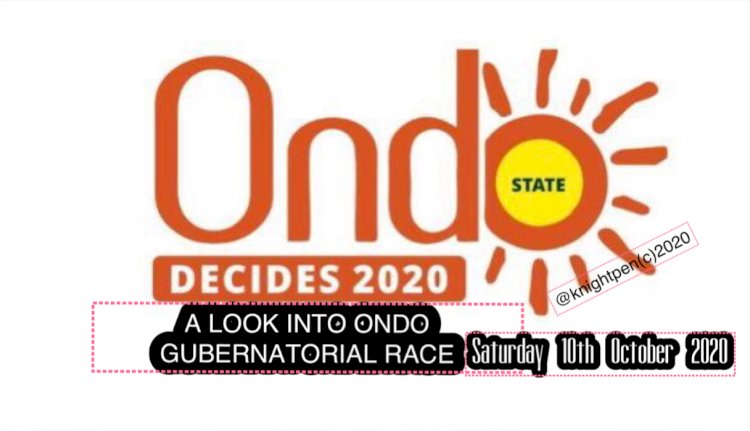 The Ondo gubernatorial election slated for this weekend 10th of October 2020 promises to be a mouth watering encounter worthy of looking forward to due to the common factors and dynamism imbibed in the candidacy of the contestant. The candidate of the All Progressives Congress, Governor Rotimi Akeredolu, the candidate of the Peoples Democratic Party, Eyitayo Jegede, and the Zenith Labour Party’s candidate and deputy governor of the state, Mr Agboola Ajayi.

After signing the peace pact, it's time to rob elbows and shoulders withe fellow contestants, but governor Rotimi Akeredolu decided not to rob shoulders or elbow with his elstwhile deputy governor, rather waving him from a far, despite shaking and hugging all other contestant. This is an action of disunity and an unfinished business even at the very point of signing a peace pact, how can the people be sure the signed peace accord is part of the plan to ensure the exercise is violence-free.

The campaign processes has been a rollercoaster and the high turnout of supporters during each parties Mega rally is an indication that the people of Ondo state are ready to come out in flying colors to vote on Saturday. The electoral commission in the state has appeal to the people to see any candidates of there choice victory on the forth coming Saturday’s election as a goal that must be achieved by going out to vote peacefully. It further urged all citizens in the state to not only vote, but to keep an eye on the process and demand for fairness and accountability at all time

HOW TO CONTROL PIMPLE BREAKOUTS