A VISIT TO ITALY

Italy is a country of contrasts-from sprawling beaches to rugged mountains ranges; from torrid summers in the south to frigid winter in the north. It is also a volcanic country, 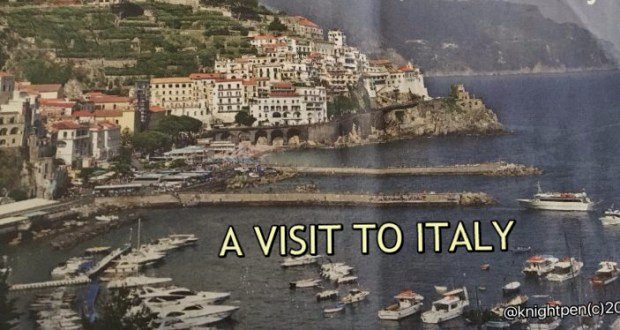 Italy is a country of contrasts-from sprawling beaches to rugged mountains ranges; from torrid summers in the south to frigid winter in the north. It is also a volcanic country, but only a few volcanoes such as Stromboli and mount Aetna are active.

Italy is one of the most densely populated countries in Europe. It has been traversed by many peoples including; Arabs, Byzantines, Greeks Normans and Phoenicians

The country is rich in historical and artistic treasures like ancient Greeks and Roman ruins or baroque and Renaissance architecture stand proudly in many of Italy’s towns and cities. Paintings, marble statues and fountains are a credit to artists such as Bernini, Michelangelo and Raphael.

Food plays a central role in daily life and many customs revolve around local cuisines. Pasta is often serve as first course follow by dish or meat with vegetables. Olive oil is used copiously as its produced there on a large scale. Pizza and resotto are well known Italian dishes.

Italians are known for being warm hospitable and gregarious. Conversation is considered an art form, so it’s common to see people chatting in public squares or enjoying animated conversation while strolling Lang a path.

Most of Italy’s population profess to be Roman Catholic but few regularly attend church. The influence in f the church is said to have weaken in recent decades as public opinions has ignored long held policies on abortion and divorce.
There is an ugly path to the pantry which is known as the existence of mafia or mafioso, this group was brought to life through the stubbornness and I ceremonial ideas of an Italian to bow to any power that may exist to arm twist an Italian in dancing to the tune of the government or to show there is always a vendetta against anyone who come against a mans will.

Although this ugly side have longed been over shadow by modernized age. But a real Italian never forgives an insult on its family or close friends and associate.

THE GSSS KIDNAP : A MESSAGE TO PRESIDENT BUHARI