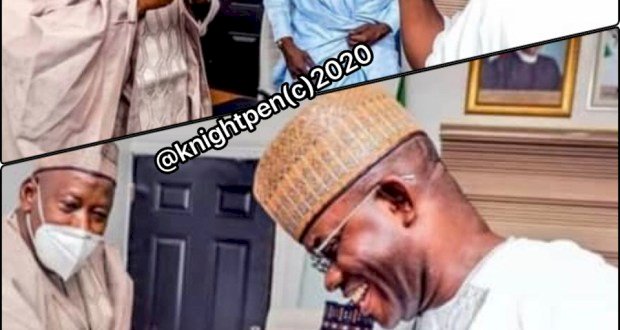 Earlier today, a picture where Ganduje was giving a sanitizing orientation to the executive governor of Kogi states Yahaya Bello surfaced.

Following the recent development in Benue where huge numbers of government officials including the governor, his First Lady and about 31 others have tested positive to Covid-19.

Ganduje who was quick to borrow a leaf from the recent happenings, will not take any chances. Subsequently, he oblige Yahaya Bello who has be very vocal in voicing his disagreement on the existence of the virus some hand sanitizer.

The Kano state governor isn’t ready to play any wild card with a doubting Thomas like Bello, do he make sure his hands were sanitized before a handshake.

Even in the picture, it’s glaring that the self opinionated Kogi state governor couldn’t be seen with a face mask. This shows his believe about the virus despite huge positive numbers turning in is still active.

THE TRUST ISSUES WITH THE NIGERIAN GOVERNMENT AND ITS POPULACE