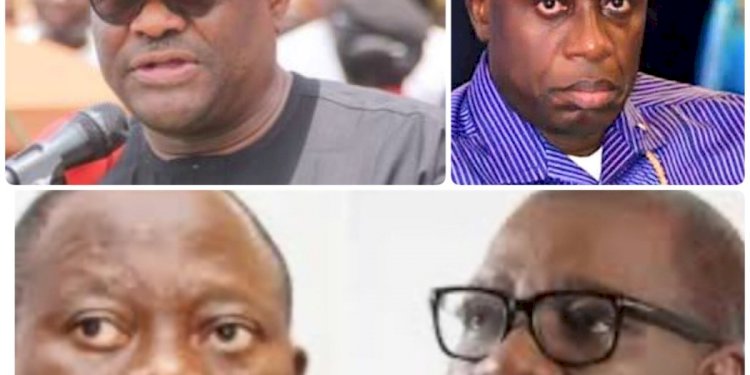 There’s a theory in academia politica call the linkage theory, this a is process whereby happenings in a particular different area affects another circumstance in a different atmosphere that seems insignificant to it at the time of occurrence…. here is an attempt to shed some lights through the recent happenings in our immediate political space.

On Monday 22nd of June 2020, a court sitting in Port Harcourt granted an injunction restricting the governor (Obaseki) from taking part in the opposition Peoples Democratic Party’s (PDP) guber primaries, slated for Thursday, 25th of June 2020.

Another one to burst your bubble; a Port Harcourt based court that granted the order restricting the political opponents of the Rivers State Governor, Governor Wike, in support of his political predecessor, Hon. Rotimi Amaechi from claiming the vacant position of the acting national chairman of the All Progressives Congress (APC) – This legal move largely helped Adams Oshiomole who’s Struggling to hold on to his position at this time and frustrated Amaechi in his bid to take control of the scotrum of the party leadership, ahead of the 2023 presidential election, which he is said to be interested in.

Another Caviar…..Amaechi’s faithful, Victor Giadom, was restricted by the Port Harcourt court from parading himself as the APC’s acting national chairman, Also, the continual elongation of the supremacy battle between Wike and Amaechi, has now spilled over to Edo State where Obaseki was counting on the same Wike – a sworn political enemy of his key supporter, Amaechi, – to assist him secure the PDP ticket.

I also read on the internet that some PDP laybacks believes that Obaseki’s deal with APC governors is to return to the party after he wins the Edo governorship election through the PDP’s platform. More twist, the Port Harcourt court, ruling on a suit filed by the leading PDP governorship aspirant in Edo State, Omoregie Ogbeide-Ihama -an ally of Wike -restrained Obaseki from participating in the primary.

It’s well known that the crisis actually originated from APC due to some allegations against Obaseki for neglecting his party member, people and the chairman of the All Progressive Congress. The initial story behind the whole crisis is when some members of the party in oshiomole’s ward suspended him thereby rendering his national chairmanship irrelevant, a move believe spear headed by Obaseki nearly four years into his governorship rule.

Subsequently the second day, the Federal High Court in Port Harcourt, refused to bar Godwin Obaseki, the Edo State Governor, from participating in the PDP primary election because he was granted a waiver by the PDP after he joined the opposition party from the All Progressives Congress (APC), and the main complainant Omoregie Ogbeide-Ihama stepped down for Obaseki.

Now, the NWC wing of the APC have been dissolved which mark the end of any possible return of the embattled party chairman Adams Oshiomole.

These scenario that started as a beef between two power brokers in Edo states has degenerated and affects more circumstances, and to a level where no one thought it could. Finally the Edo state governor secure a platform to run while the national chairman lost his position

HOW PREMIER LEAGUE ACTION GO DOWN ON SATURDAY

WAR AGAINST CORRUPTION IS MANDATORY- Presidency

REACTIONS ON #USELECTIONS AS WE AWAITS RESULT