Before her resignation, she served as the leader of the Social Democratic Party tup until 4 November 2021 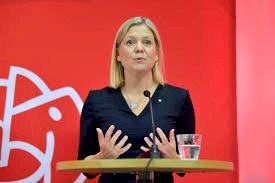 Despite receiving a standing ovation at the Swedish parliament on Wednesday, she ceased being the leader of the Nordic country in a matter of hours due to a disagreement in budget proposal.

It was reported that she turned in her resignation “after suffering a budget defeat in parliament, and her coalition partner, the Greens left the two-party minority government.”

Ms Eva Andersson government’s budget proposal was rejected, favouring one presented by the opposition with a vote of 154-143.

“A coalition government should resign if a party chooses to leave the government. Despite the fact that the parliamentary situation is unchanged, it needs to be tried again,” she added at a news conference on Wednesday.

Before her resignation, she served as the leader of the Social Democratic Party tup until 4 November 2021. Some elite decision on her path though, I just can't phantom if it were an African leader in an African country.

DIDIER DROGBA EXPRESS HIS ONE REGRET IN FOOTBALL

APPLY FOR $5000 SEED CAPITAL FOR YOUR BUSINESS START UP