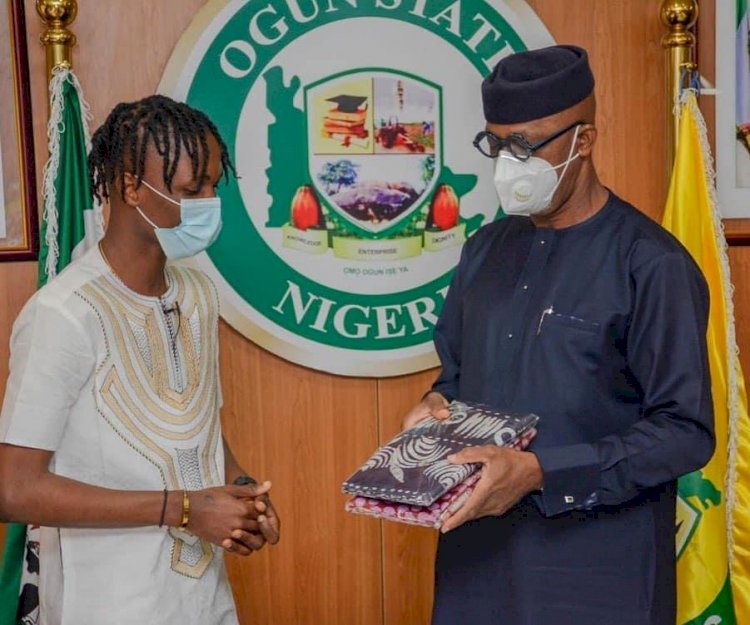 Ogun state Governor, Prince Dapo Abiodun , has appointed Laycon the BBN Season 5 winner as youth ambassador of the state. Governor who made the announcement when he host LAYCON in his office at Oke-Mosan, Abeokuta, he also gave Laycon a three-bedroom bungalow and five million naira only ( N5,000,000 ).

Abiodun expressed the hope that his good character, excellence, good virtues, calmness, integrity, would serve as a model to youth in the state.

" It is hoped that you will help inspire our teeming youths to channel their energies towards positive engagements and shun bad vices such as robbery, drug abuse, cultism, fraud, cybercrimes, kidnapping amongst other juvenile delinquencies. he said.

He described LAYCON's conduct in the house as a good component in demonstrating the Omoluabi quality which the Yoruba states are known for. It's also the primary ingredient of an Ogun state born Nigerian, observing that despite all the odds, temptations and provocations, he was able to come out unscathed and uninvolved in any scandal or immorality.

The big brother naija season 5 lockdown edition was an interesting one and truth be told, Laycon was an epitome of the best house mate anyone could hope for, he was really friendly, he remained haste free and try to live in peace with all man in the house. Even in the face of Erica's tormenting scenerio, he remained calm, cool and collected.

Another one of the reward of possessing a good character has been shown here, although, it seems the Laycon guy had it easy, but a lot of hardwork must have been put into place for him to reach his level of calmness and level headed qualities, so it's rather important for everyone to see what the guy have sacrificed to reach this level. So everyone can borrow a leaf on his qualities.

EXCITEMENTS AS PREMIER LEAGUE GET UNDERWAY IN FEW DAYS.

IS SITTING WITH YOUR LEGS CROSSED ACTUALLY GOOD FOR YOU