MEET THE POWER COUPLE BEHIND THE PFIZER/BIONTECH COVID-19 VACCINE

The world recieve the jpypus news of a break through on the covid-19, it was largely understood that the company behind the discoveries are Pfizer & biontech pharmaceuticals, but in reality, it's a power couple of Turkish and German descent that is responsible for the breakthrough. 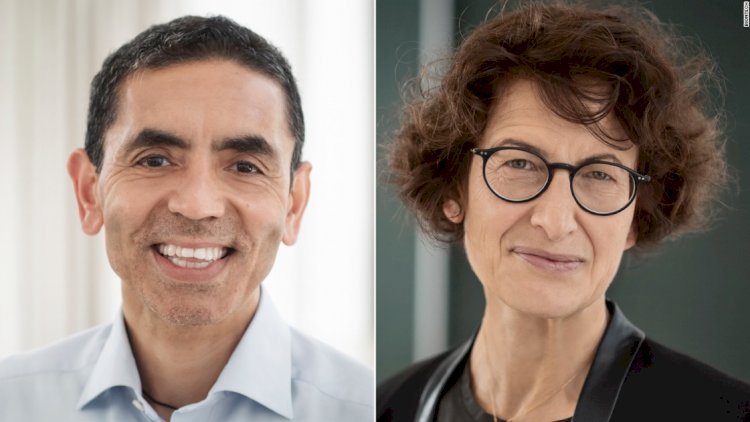 The world recieve the jpypus news of a break through on the covid-19, it was largely understood that the company behind the discoveries are Pfizer & biontech pharmaceuticals, but in reality, it's a power couple of Turkish descent that is responsible for the breakthrough.

Scientists Ugur Sahin and Ozlem Tureci have dedicated their lives to the field of oncology and infectious diseases and spent years pioneering personalized immunotherapy treatments for cancer. But amid the coronavirus pandemic, the couple's groundbreaking research in the field of modified genetic code has catapulted them into the public eye, as the brains behind   the world's first effective coronavirus vaccine.

Sahin, 55, and Tureci, 53, set up BioNTech in the central German city of Mainz in 2008. On Monday the company's partner, US pharmaceutical giant Pfizer, said their candidate vaccine was more than 90% effective in preventing infection in volunteers. The couple make use of a system that has not be approved in the medical field known as messenger RNA to generate a responsive immune system on vaccinated patients of the deadly disease.

While Speaking to CNN on Monday, Pfizer CEO's Albert Bourla called it "the greatest medical advance" in the last 100 years, the vaccine is a huge step for the scientific community, Sahin and Tureci are veterans in the world of medical achievements. The pair, both trained physicians, established their previous company, Ganymed Pharmaceuticals, in 2001 to work on developing cancer-fighting antibodies, eventually selling it for $1.4 billion in 2016.

But the couple's charitable and longstanding commitment to academia and science appear to have kept them on cause, even as their work on the Covid-19 vaccine propels them into the global spotlight. In May, the couple told CNN they felt compelled to "provide something for society," given the work they had done in their field over the last two decades.

Sahin was born in Iskenderun, a city on Turkey's Mediterranean coast. He moved to Cologne, Germany when he was four, where his father worked at a local Ford factory, according to Reuters. He met Tureci, the daughter of a Turkish physician, when the pair were both embarking on their academic careers.