The Ondo state gubernatorial debate takes place last night on channels television, while Akeredolu point out some significant reasons why he must complete a two term agenda. Jegede gave some brilliant and new ideas that he will tap into if he was elected. 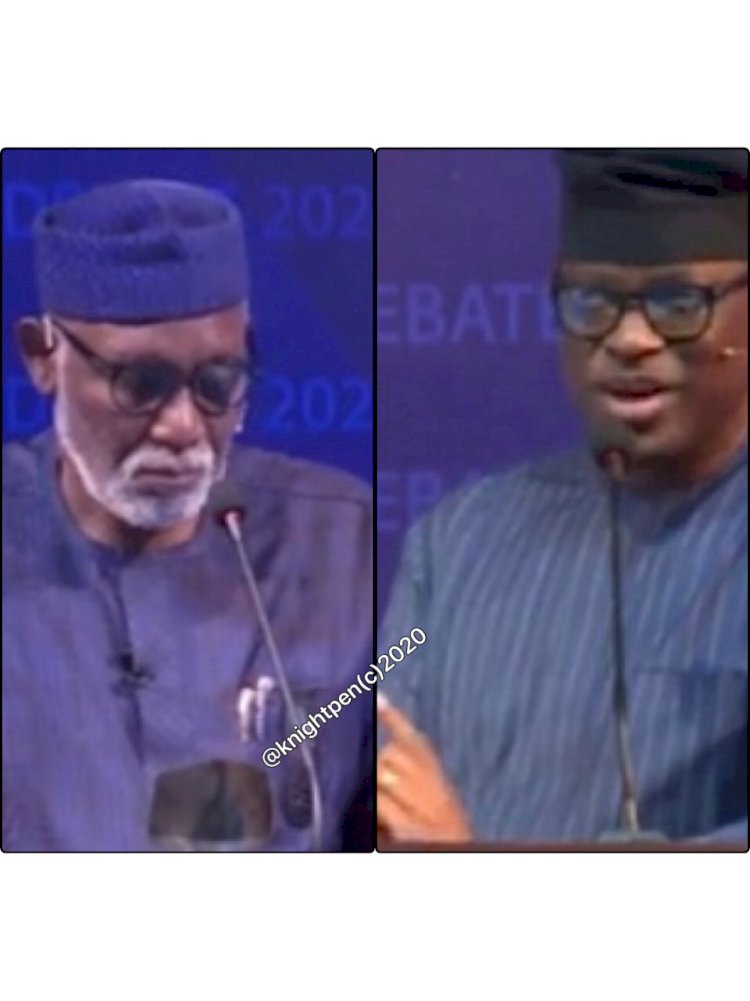 The Ondo state gubernatorial race is almost reached it climax as the election slated on the 10th of October is less than 48hrs to go  The gubernatorial candidates went to a duel of words during their debate last night on channels tv and it was an interesting spectacle to watch, while Akeredolu offers a veteran atittude who knew his onus, Jegede offers a fresh breed of youthful elegance with a soundly calmed and self assured exterior with authoritative fluency and accurate statistics. to be honest we might be seeing another Obaseki scenario in Ondo come this weekend and if that happens, then PDP might be taking over the country's political spaces once more.

The type of candidates they feeds these days posses one credibility or another which gave them a fighting chance at the poll, unlike they use to in the past. The PDP candidate Mr Eyitayo Jegede SAN seems like a candidate who can sway the interest of the people in his favor with his oratory qualities, he's technically gifted and if anyone can bring down Aketi, it's definitely him.

ALSO READ: A LOOK INTO ONDO FORTH COMING GUBERNATORIAL RAC

Given the circumstances of this debate, one will easily fall for the younger smooth talking, calm and elegant Eyitayo Jegede and easily write off  the older Rotimi Akeredolu simply tagging him a old player who simply have pass his prime, but it's important to give a benefit of the doubt to a older veteran who have not perform badly in his craft either. He mentioned some good achievement and some other that needed his presence in office to come to fruition.

While Akeredolu is been there and almost done that, Jegede offers a fresh idea, youthful prowess, presumably accurate analysis and an uneasy calmness which is unusually of Nigerian politicians, he seems too good to be true which is why populace must be skeptical of him, his calmness gave him an extra edge at turning things around and getting it done the right way, although Akeredolu might be better off if given the opportunity to continue in office for another term, it wouldnt be a loss if Jegede take over.

REACTIONS ON VAR CONTROVERSIES IN THE PREMIER LEAGUE THIS SEASON