The Grammy nomination list have got musical fans around the world reacting to the released list, while some are sad that their favorite artiste ain’t nominated, some thought one or two of the nominations shouldn’t be included at all. 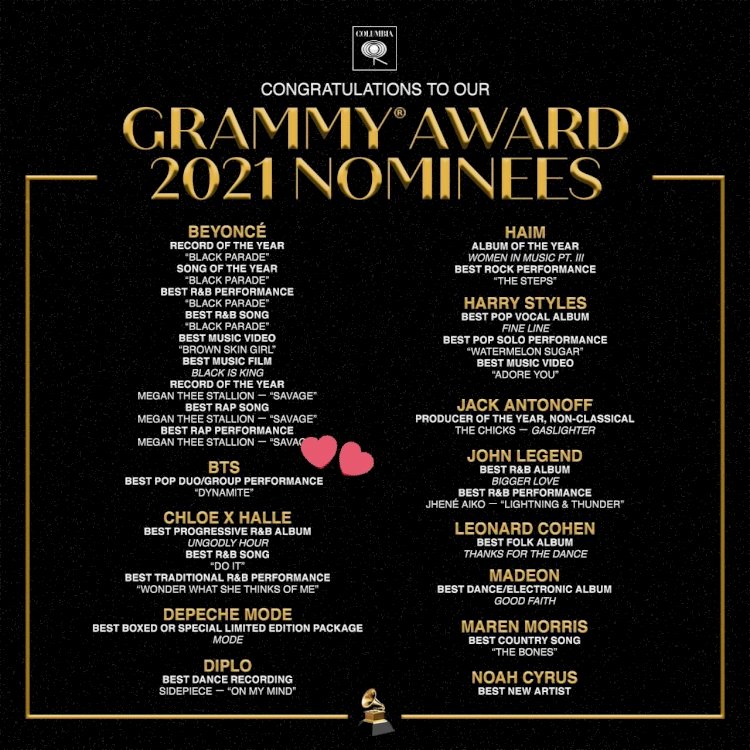 Camila's Romance album, Selena's Rare album deserves at least one nomination. Grammy is becoming worse and worse every year. The Grammy’s have been terrible for decades! The Weeknd literally has one of the most acclaimed album this year with staggering chart success.

Niall Noran wrote: I wasn’t devastated by the omission this year, I’ll make the music and it’s ok if they decide it’s not Grammy worthy this year. I’ll try my best and hopefully it happens next time or another year.

A Bieber fan also react; y'all pissing me the fuck off justin wasn't even nominated in any of the big important fields but y'all are still whining as if its his fault that abel got snubbed. they do this EVERY YEAR. it's not justin's fault that the grammy committee is fucking evil like what's not clicking. K-pop band BTS was nominated for a GRAMMYs  for best pop duo/group performance for the effervescent single “Dynamite.” Still, fans and music critics alike say they were robbed.

I think The Weeknd deserves a Grammy nomination but if Justin wouldn’t be nominated and he would ever call out the Grammys for not nominating him y’all would call him desperate..

Even Grammy K-pop’s skeptics admit that the bona fides are there, sold-out stadium tours, mainstream radio play, phenomenal album sales, a No.1 single. So why isn''t BTS in contention for Grammys  song or record of the year. SERIOUS TALK. If BTS won’t get nominated for grammys,keep calm, we ain't trending ht..we ain't bringging unnecessary attention to us. We ain't giving them a chance to write articles about how we react. Bts is deserving, yeah I get how we shouldn’t bring all the attention to us. But, all we are doing is standing up for what is right. I still get what you mean- like a while ago someone posted an article saying that “army is sad because bts didn’t get nominated

It's a fact Burna has good songs but pls Burna didn't put Nigerian music on the map, lots of artists including Burna are doing that everyday. If u do ur research thoroughly, u will discover that the Grammy Awards is based on favoritism, the politics played in it is noticeable.

OONI REMAINS IN SECLUSION TILL THE FINAL DAY

HOW THE PREMIER LEAGUE BECAME INJURY PRONE DUE TO SUB RULES

GET FAMILIAR WITH BUHARI'S NEW SALARY STRUCTURE FOR FEDERAL TEACHERS