FRENCH PRESIDENT UNDER PRESSURE FROM THE OPPOSITION PARTY 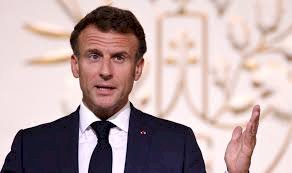 French President Emmanuel Macron is calling for a sharp 10% reduction in the country’s energy use in coming weeks and months to avoid the risk of rationing and cuts coming winter.

Amid tensions with supplier Russia over the war in Ukraine. Macron urges French to save energy, so as to be in a safer position during the winter period.

This has brought a vote of no confidence on the reign of the youngest French President.

But analyst have insisted the French Constitution does not allow that. They can only present such a motion against Elizabeth Borne's government. They did it once, but did not get a majority.

THE REMAINS OF 215 CHILDREN DISCOVERED IN A FORMER RESIDENTIAL SCHOOL...

JAPAN OPEN MORE VACCINATION CENTERS AHEAD OF THE OLYMPIC GANES

WHY SOFT LANDING FOR ROBERT MUGABE